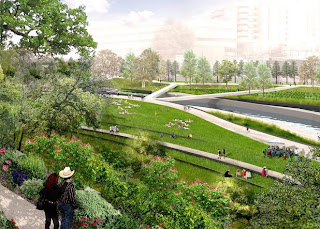 Waller Creek’s reimagining by 4 design teams were unveiled recently for public comment, Statesman.comreports.  The teams of landscape architects, design architects, artists, environmental engineers, ecosystem restoration professionals and sound and lighting designers were charged with coming up with concepts to overhaul 1.5 miles along Waller Creek, 28 acres in total.
The designs feature native plants and trees that spruce up the creek banks and provide shade.  Plans make it easy to get around, with bike paths and pedestrian trails and bridges that connect with the adjacent city streets.  Public art is another major feature of the designs, as well as lots of spaces for picnics, play areas for children, and sports areas.
This being the “Live Music Capital of the World”, public performance areas have also been included.  These take the form of terraces formed from natural stone to be an amphitheater, or a canopy topped with solar panels that will act as a pavillion or entertainment stage, depending on the design.
The Waller Creek Conservancy had said they would be raising $60-$80 million to realize the winning design, they now say that they’re holding off on naming an amount until a feasibility and cost analysis is done next year.  The city will also throw in $60 million to refurbish the creek.  $13 million of that will be voted on in a November bond referendum.  The city has already spent $146.5 million for a flood control tunnel under the creek that should be done in 2014.
The conservancy has named a five-member jury of design professionals who will judge the winning design.  The design will just serve as a “blueprint” for whatever could be built, however.  The designs can be seen around town or at www.wallercreek.org.
Looking for a great apartment near the new Waller Creek redevelopment?  Call Apartment Experts North today!